History of the Krobo 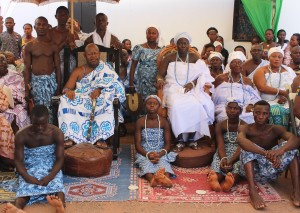 The Dangme people traveled as one group, and it was not until their arrival in Ghana that they split into the seven Dangme groups we know of today. The place of their split was renamed “Lɔlɔvɔ”, an Ewe term meaning, ”Love is finished (ended)”. The place is still in existence and is now known as the Tagologo Plains.

The Krobo people pressed on towards the west until they saw a 1,108 feet high mountain with a gorge (valley) dividing it into two unequal sections. The people believed this would be a good place to settle as the climb to the top of the mountain would be difficult, meaning it will be a safe place for habitation and repulse attacks from invading tribes and enemies. Two leading hunters- Aklo Muase (Aklo Natebi) and Madja were sent by priests to ascertain the suitability of the mountain for settlement.

The report that came back confirmed that this was indeed a good place for habitation and the mountain later became known as “Klo yo” (Krobo Mountain). In fact the name “Krobo” is of Akan origin and is derived from the term “Kro-obo-so-Foɔ”, meaning “Town of rock/mountain dwellers”.

The Mountain became the cultural and ritual centre for the Krobo people. It was a town of stone houses, many stories with several rooms – some accounts state there were some houses with 20-30 rooms. In fact missionaries who visited the mountain stated that the architecture was nothing like what they had seen in Africa before.

The Krobo developed their own watering system on the mountain to support their growing population. When the population grew beyond the mountain, the people started spending more time in the surrounding areas. In fact through the Krobo Huza System of land acquisition the Krobo people managed to acquire large amounts of land in the surrounding areas in what Field referred to as the ‘Bloodless conquest’.

From the 17th century, the Krobo Mountain became a place of several attacks from invading tribes and enemies. However the Krobo people were always able to fight off the enemy and it was only through the introduction of Rockets and Rifle fire by the British that the Krobo we able to be defeated.