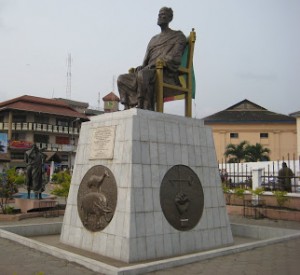 Ga Rulers from 1500 to 1600s
The history of the Gá-Dangme people indicates that the rulers
listed below preceded King Ayi who ruled from 1680 to 1700:*

King Ayi Kushi: the Revered Spiritual and Political Leader.
Ayi Kushi was a revered political and spiritual ruler who is credited with the formation of the Gá State. His son, Ayitey, is said to have marched with the Gá, Dangmes, Obutus, and Awutus to establish the inland kingdom of Ayawaso. The kingdom of Ayawaso’s capital was Okaikoi. Osudoku, at the time, was the epicentre of Dangme culture. Ayi Kushi is described as an illustrious and astute leader, and law-giver who united the Gá-Dangme into a powerful tribe; and set the precedent for the diplomatic and conquering activities of later Gá kings. To strengthen the Gá state, Ayi Kushi encouraged intermarriage between Gás, Dangmes, Akyems, Awutus, Akwapims and Obutus. To preserve the religious purity of the Gás, Ayi Kushi gathered the Gá leaders at Legon Hill to discuss his Seven Commandments. He admonished the Gá people:
• to love and cherish the commandments of their fathers;
• to obey the will of the Deity at all times;
• to show extraordinary self-sacrifice for the group;
• to show sacrifice as a life-long duty to one’s children;
• not to steal;
• not to lie; and
• to be utterly truthful and pure in all one’s activities.
It is believed that he died soon after this event and was buried at Okaikoi Hill.

King Mampong Okai: the Wealthy King.
Mampong Okai was reputed to be so wealthy that he went under the appellation “Owura Mampong Okai”. His son Okaikoi was nicknamed “Afadi” or the prosperous one. His court has been described as magnificent. At that time, the Gá people controlled the gold trade and the Ayawaso Kingdom was the most powerful among the southern states. He married Dode Akabi, the Obutu princess, who succeeded him upon his death.

Queen Dode Akabi (1610-1635): the Obutu Princess & Tyrannical Queen.
Dode Akabi was the first and only female Gá ruler and was much feared and hated. She was the first ruler who was not also the spiritual leader because only males could hold the position of high priest or wulomo. This led to a concentration of religious authority in the hands of the wulomei. Dode Akabi is credited with bringing much pomp and opulence to the royal throne. However, she was also a tyrannical ruler and incurred the wrath of her subjects by imposing direct legislation and a series of brutal decrees. She is also credited with the tradition of sitting on stools which hitherto were taken into wars and used to uplift the spirit of the troops. Dode Akabi demanded to sit on the war-stool to visually symbolise her authority over her people. She was eventually killed by her own subjects who rebelled against her.

King Okaikoi: the Warrior King.
Okaikoi, a legendary fearless warrior, was the son of Mampong Okai and Dode Akabi. He formed the Akwashong or supreme military command which was intended to provide the basis of a renewal of Gá-Dangme military power. Okaikoi increasingly alienated his own generals several of whom eventually betrayed him when they deserted him in a war against the Akwamus. He cursed the deserters and blessed the loyal generals, and finally took his own life. However, his courage enabled thousands of women and children to be evacuated from Ayawaso.

The death of Okaikoi marked the end of the Ayawaso period; many Gá retired to Anecho or Little Popo (also known by the Gá as Tóng) in present-day Togo, but the bulk of the population resettled or joined kinsmen along the coastal strip. Increasing trade with Europeans had rendered the coast or Little Accra (Gá Mashi) more attractive than Ayawaso. Prince Ashangmo, the son of the king’s brother, Okai Yái, continued a long guerrilla campaign against the Akwamu, driving them to Fanti. Eventually, Ashangmo retired with all the Gá from Labadi down to Ningo to Little Popo. Thus, the death of Okaikoi marked the beginning of a long period of uncertainty in Gá-Dangme history.